I arrived in Colombia on September 4 at 2:00 AM local time and left on October 1 at 8:50 AM local time. During those 27 days, I took part in countless conversations about the country’s peace deal, an accord between the government and the Fuerzas Armadas Revolucionarias de Colombia (FARC) that held the power to end Colombia’s civil war after 52 years of bloodshed.

Among those I spoke to were artists, taxi drivers, family friends, young adults from one of Colombia’s most notorious comunas, orthodontists, and foreigners. I spoke to old people and young people, rich people and poor people. I spoke to those who have a voice in society and those who have zero say. I spoke to natives of Barranquilla, Santa Marta, Cartagena, Medellin, Bogota, and Cali. Each and every person had an opinion, even if it wasn’t a strong opinion.

On October 2, I found myself sitting at the dinner table of my uncle and aunt’s home in Ecuador. I had crossed the border by foot the day before, walking across the Puente Internacional de Rumichaca that lies above the Rio Chiquito and separates the Colombian pueblo of Ipiales from the Ecuadorian town of Tulcan. I assumed I was waiting for the inevitable and that confirmation of a “Si” victory would arrive by the end of the night.

As I sat at the head of the table, I suddenly felt my phone vibrate. I pulled it out of my pocket and, to my astonishment, read a push alert from the Guardian, reporting that the peace deal had failed by a thin margin. “No” had won. Peace had lost.

Instantly, my mind was flooded with memories of the signing of the peace deal from six days earlier. As Juan Manuel Santos, Colombia’s president, and Rodrigo “Timochenko” Londoño, FARC’s rebel leader, prematurely signed the historic agreement with a pen fashioned from the spent casing of a bullet, I was in Bogota’s Plaza de Bolivar, the country’s most iconic square. It was where, in 1985, guerrillas from M-19, a now-defunct armed group, seized control of the Palacio de Justicia, resulting in an over-the-top response from Colombia’s government in which nearly one hundred people were killed and twelve people, most of whom were cafeteria workers that were taken alive by the army, disappeared. The tragedy is among the darkest chapters in Colombia’s dark history, and Santos apologised for the raid on its 30th anniversary in 2015.

The Plaza de Bolivar was the place to be for the signing of the peace deal, and I arrived there just in time for the ceremony and to the beat of a drum line. The atmosphere was as festive as it was emotional, and the plaza, packed from corner to corner, was decorated with Colombian flags and banners that featured messages of peace and hope for the future. Everyone in attendance was ready to contribute to a new chapter in Colombia’s story, ready to confine the conflict to the country’s history books. Tears were shed during a minute of silence for the victims, among whom are up to 260,000 people who are no longer around and about 8 million others who have been displaced. Chants of “si se puede” echoed across the square. When Santos and Timochenko shook hands, white balloons and red balloons were released into the sky and flares were lit in celebration. Aterciopelados, Colombia’s most popular band, took the stage once the ceremony ended and the plaza became the scene of a party. It was a moment most Colombians thought would never come. 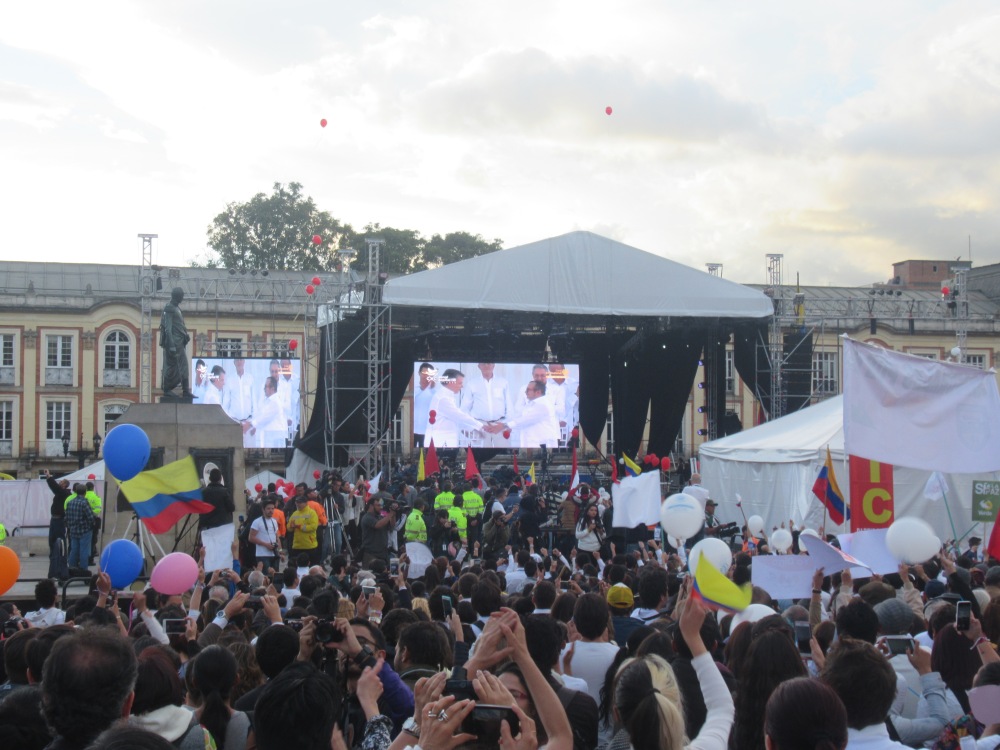 But it was all in vain. The plebiscite didn’t go to plan. “No” won by the thinnest of margins, collecting 50.21% of the votes while “Si” garnered 49.78%. Given what was at stake, the voter turnout was embarrassingly low. Only 37.43% of eligible voters cast a ballot. Four years of negotiations in Havana were meaningless. Santos had admitted that he didn’t have a plan B. Where the fuck does Colombia go from here?

To better understand why the peace deal failed, it’s important to know what provisions it included. Among the most notable arrangements were the following:

Essentially, the peace deal was aimed at transforming FARC into a political party, a favourable move for the Marxist rebels given that guerrilla movements are a dying art in Latin America.  As Hugo Chavez declared in 2008, armed revolution in Latin America is “out of place.”

For many Colombians, the peace deal’s provisions weren’t harsh enough. Those who support “No” want jail time and don’t want FARC anywhere near Colombia’s political landscape. It’s an ignorant way of thinking for two reasons. First of all, it assumes that the rebels are entirely to blame for a multi-dimensional civil war that involves the government and its army, guerrillas, narco cartels, and rightwing paramilitaries. Nobody’s hands are clean, and it’s foolish to conclude otherwise. Second of all, it completely dismisses the civil war’s history, turning a blind eye to reality. In the 1980s, during an attempted peace process, FARC turned in its guns and formed a political party, only for 3,000 members of the party to subsequently be killed by rightwing paramilitaries, many of which were backed by Colombia’s government as well as the United States of America. In other words, FARC was betrayed the last time it tried to exchange weapons for words.

In many ways, it feels like FARC wants peace more than those who voted “No.” And that may very well be the case. If one thing was learned from the plebiscite, it’s that the Colombians who are most affected by the civil war are the ones who voted “Si” and want to end the bloodshed once and for all.

Here are the results from the areas of Colombia that have been most affected by the violence, courtesy of Semana:

Bojaya serves as a wonderful albeit heartbreaking example of how those who have been at the core of the civil war are desperate for peace. In 2002, the pueblo was the site of a massacre. A confrontation between FARC and rightwing paramilitaries led to an indiscriminate bombing of a church that killed 119 people. But that didn’t stop 96% percent of its inhabitants from voting “Si.”

The question is obvious: If Bojaya’s residents can find forgiveness in their hearts, why can’t the rest of Colombia?

The face of “No” is Alvaro Uribe, a conservative man who was Colombia’s president before Santos and who severely weakened FARC during his years in office with a bloody onslaught. As was written in a phenomenal editorial in The New York Times, he is “the chief obstacle to a negotiated end to Colombia’s 52-year armed conflict.” He offers no solutions, no alternatives. He is filled with vengeance, blaming FARC for killing his father. He allegedly holds ties to rightwing paramilitaries that are responsible for forced disappearances and massacres. He led a campaign against the rebels loaded with human rights abuses, which included dressing up killed civilians as enemy combatants to boost body counts. He is everything that is wrong with Colombian politics. He only wants peace if it’s on his own terms. Ivan Marquez, FARC’s commander and chief negotiator, wrote on Twitter: “If we leave peace in Uribe’s hands, the devil will take it.”

Unfortunately, an exaggerative and deceptive campaign saw many Colombians sympathise with Uribe and vote “No.”

One month since Colombia’s peace deal failed, it’s hard to know how the country’s future will play out. In the aftermath of the plebiscite, the “Si” received two boosts. Santos received the Nobel Peace Prize 2016 for his diplomatic efforts and the ceasefire between the government was extended until the end of the year. There’s reason for optimism and FARC’s desire for peace and unwillingness to return to war can’t be undervalued. The rebels insist on using words as their weapons and have met victims in order to express their remorse. Their efforts are a shining example of the power of forgiveness. Nonetheless, it remains unclear how a new agreement can be legitimised and what will happen if 2017 arrives with no consensus in place.

Maybe it was all too simple. Maybe it was naive to think that forgiveness was enough for Colombia to move forward.