It’s a September evening in Aracataca, Colombia, and, after an afternoon thunderstorm violently shakes the tropical pueblo, I find myself at the home of Carlos Nelson Noches, who proudly describes himself as the only one of Gabriel Garcia Marquez’s childhood friends who is still alive today.

Noches lives directly across the street from Casa Museo Gabriel Garcia Marquez, the reconstructed house where Gabo was born and raised by his grandparents, and which operates as a 14-room museum that is ground zero for Aracataca’s limited tourism industry. He is 85 years old and, despite using a cane to get from Point A to Point B, boasts a contagious youthfulness and phenomenal memory. Above all, he is an embodiment of the village that was immortalised as the mythical town of Macondo in One Hundred Years of Solitude.

As I sit down at the dinner table, topped with a white tablecloth and surrounded by wooden chairs, Noches turns down the volume on his small television in order to begin sharing stories of the days when he and Garcia Marquez would drink rum together as youngsters. He claims he first met Gabo around 1942, but it wasn’t until years later, when Gabo returned to Colombia after being banished from Venezuela, that their friendship was formed.

“They expelled him,” Noches recalls. “That’s how he came. They expelled him from there because he was undocumented in Venezuela and he came to Aracataca selling encyclopedias. But he didn’t live here (Noches’ street) any longer. He lived with a mutual friend, Luis Porto Garcia, a friend of his since infancy and a friend of mine, too. And he came selling encyclopedias. And when he sold an encyclopedia, we would get together and drink. Here we would drink almost every day, drinking pure rum.”

As Noches explains, Porto Garcia’s mother worked as a liquor dealer, acting as an intermediary between the government, who controlled the distribution of alcohol, and estancos, better known as liquor stores. But instead of going to the store to buy rum, Noches and Garcia Marquez went straight to Porto Garcia’s mother in order to receive a discount. “That’s how we bought it,” Noches confesses with a grin. “Cheaper. A bottle of rum cost 60 cents.”

I ask Noches what a night of drinking with Garcia Marquez was like, to which he replies: “Talking about everything! We would talk amongst our circle of friends. We would talk about what happened to him in Venezuela without documentation.” His face lights up as he reflects upon their inebriated conversations, and he shares them with a lucidity that suggests they took place a few weeks ago when, in fact, they transpired 70 years ago.

Those days of downing rum together eventually came to an end. In 1946, Garcia Marquez, following his parents’ wishes, enrolled in the law program at the Universidad Nacional de Colombia, located in Bogota. Although he quickly lost interest in law, he explored the capital and took to writing rather than returning to Aracataca. In 1948, he transferred to the Universidad de Cartagena and began his career as a journalist.

“When he left, I no longer knew him,” Noches says with a sharp drop in his tone. “It was about 13 years that he was gone and he was a man when I saw him again. He had already written La Hojarasca (Leaf Storm), the first novella that he wrote.”

In 1967, One Hundred Years of Solitude was published to universal acclaim. The popularity surrounding Gabriel Marquez, by this time a friend of Fidel Castro, hit unprecedented heights. Eight thousand copies were sold in the first week and new printings sold out week after week. Pablo Neruda, a Chilean poet and Nobel laureate, hailed the book as “the greatest revelation in the Spanish language since Don Quixote of Cervantes.” The Buendia family was celebrated across the planet, and Gabo was established as one of history’s greatest authors.

But Noches makes no mention of 1967 as we discuss how Garcia Marquez outgrew Aracataca. Instead, he conjures up memories of 1972, when Gabo was given the Premio Internacional de Novela Romulo Gallegos by Venezuela’s government. The award, which honours the work of novelists, included a cash prize of 100,000 Venezuelan bolivares, which was then roughly the equivalent of 25,000 US dollars. All of it was donated to the Movimiento al Socialismo, a Venezuelan movement that was founded in 1971 by the country’s Communists and identified with Marxism-Leninism.

“He won the Romulo Gallegos in Venezuela,” Noches recounts. “He won an award there and he gifted all the money to communism!”

The last time that Noches and Garcia Marquez saw each other in Aracataca was on May 30, 2007, but it was merely from afar. Gabo returned to his hometown for the first time in almost 25 years, setting out from the coastal city of Santa Marta on a locomotive painted with yellow butterflies and dubbed as the “Macondo Express.” In One Hundred Years of Solitude, it is the train that brings “so many ambiguities and certainties, so many pleasant and unpleasant moments, so many changes, calamities, and feelings of nostalgia to Macondo.” With an entourage of business leaders and politicians, the pueblo’s most famous son was given a hero’s welcome in which the town was decorated with yellow balloons. He was mobbed at the railway station, and the chaos triggered by his return made it impossible for the childhood friends to approach one another.

“The last time he came I couldn’t even say hello or anything,” Noches explains as he’s forced to raise his voice due to a parade outside his home. “There were too many people.”

However, Noches and Garcia Marquez united one last time before Gabo passed away.

In 2011, three years before Garcia Marquez’s death, Noches learned that his sister had invited Gabo for lunch in the colonial city of Cartagena. He immediately told her not to purchase anything and packed three chickens and some meat in order to make sancocho, a traditional Colombian soup.

“We talked a lot,” Noches remembers. “About everything, about things from here (Aracataca). I had to help him with the reminiscence of here because he forgot everything.” At that point, Garcia Marquez’s memory was in the process of abandoning him. He remembered about as much of his childhood as Macondo’s residents remembered about the banana company’s massacre. Nonetheless, it’s clear that Gabo didn’t forget about his lifelong comrade, evidenced by a picture hanging in Noches’ living room depicting their final encounter. 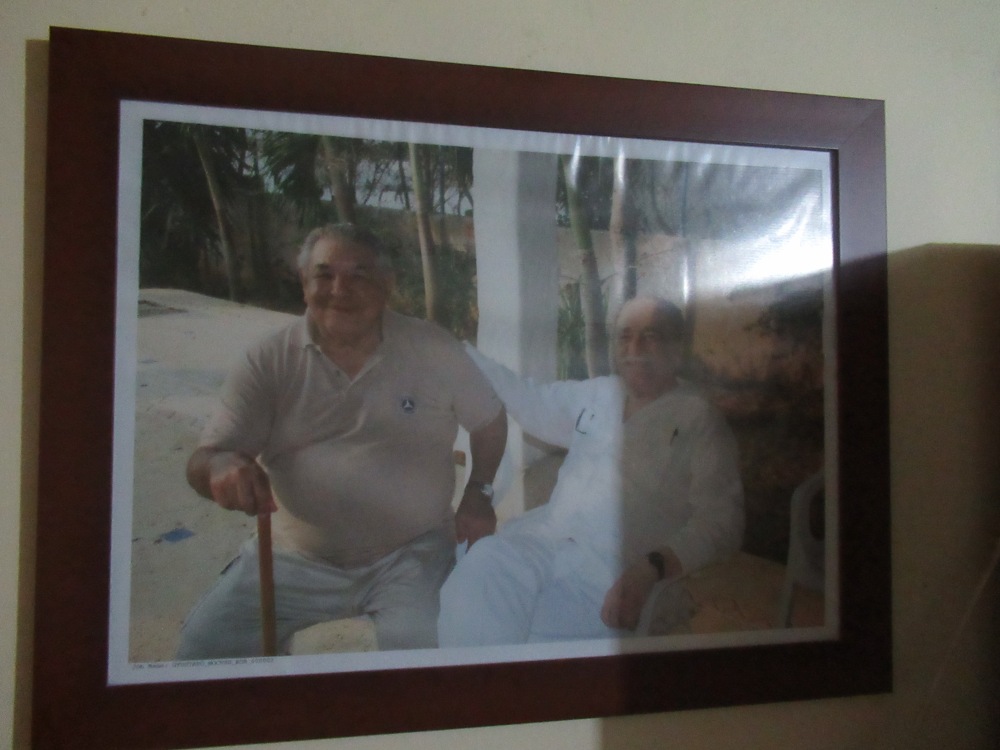 Before I get the feeling that I’m wasting an old man’s precious time, I ask Noches what his best memories are of Garcia Marquez. He wastes no time in giving me an answer, proclaiming: “When we would drink rum here! When he came here running, screaming ‘I sold one! I sold one!’”